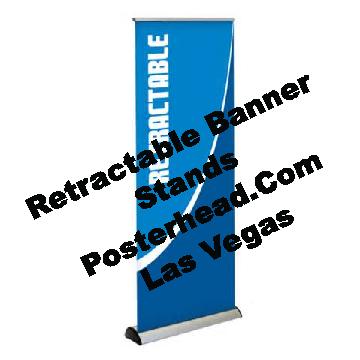 Standee retractable banner stands are also incredibly popular at shows and events in Las Vegas.  At every event at one of the three big convention venues:

Standee retractable banner stands are very inexpensive with the popular 33″ x 78″ stand ( that comes with carrying pouch and adjustable pole stand) costs less than one hundred dollars. These stands are available in the Las Vegas area by many sign stores . Standee retractable banner stands come in many different widths and heights to match your display needs. These stands come in a small two foot side model all the way up to around five feet wide. Since the heights of these stands are adjustable, you can have as little as around 40″ tall all the way up to about 8 feet tall in height.

This year, the Magic Convention is being held at the Las Vegas Convention Center, 3150 Paradise Rd. Las Vegas Nevada 89109.  There are expecting about 85,000 people to attend this years show, making it one of the biggest and best. Many signs and banners will be needed for these shows and many of these signs and banners will need to be made the same day or within 24 hours because of changes in marketing plans. However, often the signs and banners are needed because they shipping fails to deliver their graphics in time or they get received damaged and need replacing.

Retractable banner stands at Las Vegas Magic Convention are not expensive  and can be purchased for under one hundred dollars in the popular 33″ wide by 78″ tall banner stand. Of course, larger banner stands are available but they do not cost more than $200.00. All these banner stands can be made the same day or within 24 hours on a rush order basis.

Everybody attending the Magic Show in Vegas have a Great time.

Upright banners stands in Southern Nevada can be printed and mounted within 24 hours, many times in the same day. This is very important because many people find themselves in need of last minute graphics. Often, the upright banner stands will get damaged while being transported to Las Vegas or if they are being shipped, the shipping company will send them to the wrong location or they simply get lost. That is why many vendors prefer to have there upright banner stands made in Las Vegas and simply either have them dropped off at their event or pick them up themselves. After all,  you spent a lot of time and money to get things planned for your event display and you need your graphics for a proper presentation.

Upright banner stands in Southern Nevada are made locally in Las Vegas and an be delivered to your event. Many sign shops cater to the events and shows in Las Vegas because there are so many of them. Every casino has floor space available for these events and they attract millions of people to Las Vegas Nevada every year. These banner stands come in many sizes so that you can pick the right size upright banner stand specific to your needs. These banner stands are full color and you can have almost anything imaginable printed on them because of the advancement is modern day large format printers.

Pull up banner stands Las Vegas 89109 can get you the banner stand in a hurry when you need it. The 89109 zip code is for the Las Vegas corridor that carters to the conventions and trade shows. In fact the biggest trade shows and convention halls are located in that zip code.  The Las Vegas Convention Center ( LVCC) and the Sands Expo are located in that part of the city. In addition to the Sands Expo and LVCC, the Westgate Casino and Hotel, Wynn, Palazzo and many other upscale facilities have their smaller event facilities in this zip code. Millions of people come annually to these facilities for the many trade and exhibitions hosted by these venues.

Las Vegas is by far the leader in trade shows and conventions. The biggest and the best trade shows happen in Vegas for many reasons. While Las Vegas has state of the art event venues, its also the  many amenities that Las Vegas has to offer  such as year round golfing, fine dining, top “A” list entertainment, shopping, etc. that causes many industries to want to have their events and shows in Las Vegas.

Pull up banner stands Las Vegas 89109 are one of the main display graphics at these events and shows. Space is always a commodity in these exhibition and event booths and you have to maximize the space allocated to you with the proper graphics to reinforce your marketing message. Pull up stands are not very expensive and considered a cheap way to advertise at your event. The pull up stands can be set up by yourself in a minute or 2 and no outside union shop is required to set up your booth.

Pull up banner stands Las Vegas 89109 are made and available in the local Las Vegas area at very good pricing.

Vegas 89119 retractable banner stands are full color. They can have as many colors as you want on the banners along with pictures and graphics. The banner stands are printed with special inks that are designed to be bright, colorful and long lasting. It only takes a day or two to have a retractable banner stand made for you and in case of a rush, many times they can be made the same day. In Las Vegas, it is quite normal to have to replace graphics that were damaged or lost for a trade show quite quickly so that the show can go on.

Contact a local sign shop in the Las Vegas area in case you need one of these retractable banner stands. They would be most happy to assist you in your graphic needs.